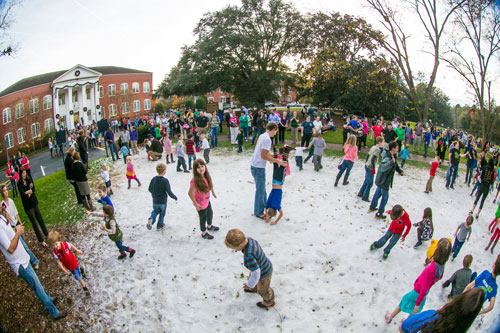 It was wonderful to see so many of you last week for our annual Lighting of Sweetheart Circle. I always enjoy this festive beginning of the holiday season on campus, and I was delighted to see so many students and community families joining us for the event.

I hope you have a happy holiday season, and I look forward to all of the exciting developments in store for Georgia Southern in 2014.

Victory in The Swamp 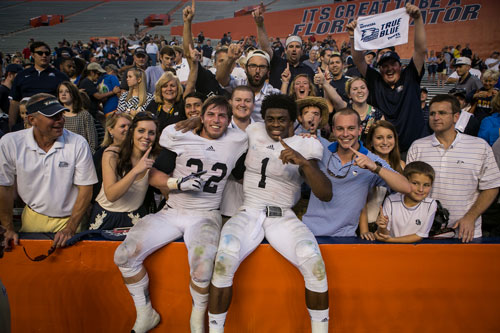 What an exciting win for the Eagle Nation! It was great to see so many fans in Gainesville celebrating our victory over the Florida Gators last month. This was the first time Georgia Southern has beaten an FBS team, and it was an amazing way to end the season, and our run in the FCS. 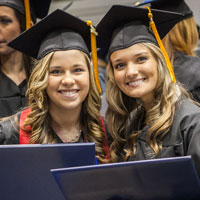 The 22nd annual fall commencement ceremonies will also be streamed lived at GeorgiaSouthern.tv.

I am proud to announce that two Georgia Southern scientists are featured in the latest online issue ofDiscover In-Depth. Professor Emeritus James Oliver along with Dr. Natasha Rudenko, a senior research scientist from the Czech Republic who collaborates with Oliver and works at the University for several months a year, are featured prominently in the issue. The article, “Ticked: The Battle Over Lyme Disease in the South,” traces the story of Lyme disease in the southern U.S.

Two COE alumni have been named Georgia’s 2013 National Distinguished Principals through the National Association of Elementary School Principals (NAESP). This year’s winners are Jesse Davis, principal of Feagin Mill Middle School in Houston County and Amy Duke, principal of Springdale Elementary School in Bibb County. The program was established in 1984 by the NAESP to recognize elementary and middle school principals who set high standards for instruction, student achievement, character and climate for students, families and staffs in their learning communities. Congratulations to our distinguished alumni.

It was a privilege to tour the Boys and Girls Club of Bulloch County a few weeks ago, and see what a difference this incredible facility is making in our community. I was joined by Rob Whitaker, vice president of business and finance and we presented a donation to the Club on behalf of the University. Rob, along with Georgia Southern Athletic Foundation President John Mulherin, University Golf Coach Larry Mays and Associate Head Coach Carter Collins, were the members of the winning foursome from the 2013 Chancellor’s Fall Classic Charity Cup Golf Tournament held at The Georgia Club in Athens. Their victory included a $1,500 donation on behalf of Georgia Southern to a charity of the University’s choice.

We are very excited to support the Boys and Girls Club, which serves approximately 400 children and focuses on providing after-school homework help and tutoring along with plenty of recreational opportunities.

Congratulations to faculty members Delena Bell Gatch, Ph.D. (’95) and Misty Loughry, Ph.D. They were among five University System of Georgia faculty members selected to receive the System’s most prestigious teaching awards. Dr. Gatch is a physics professor in the College of Science and Mathematics, and she was awarded the 2014 Regents’ Teaching Excellence Award. She was selected based upon her ability to gather data and adjust her teaching methods from a traditional style to active learning.

Dr. Loughry, a professor of management in the College of Business Administration, is the winner of the Regents’ Award for Scholarship of Teaching and Learning. She was selected as a result of her work in helping first-generation college students succeed. Dr. Loughry and her colleagues have worked for more than a decade to develop web-based tools to support teamwork in higher education classes.

Drs. Gatch and Loughry will be recognized during the USG Foundation’s annual Regents Salute to Education Awards Gala on March 22, 2014 in Atlanta, Ga.