Marking the halfway point of the academic year, December is a month that calls us to slow down, bundle up (occasionally) and reflect on the calendar year that has passed. And though we still have much to accomplish in 2016 and beyond, Georgia Southern has a lot for which to be thankful.

Thanks to Gov. Nathan Deal and the Georgia General Assembly, we broke ground for a $9.5 million home for one of the nation’s leading ROTC programs; opened a 30,000-square-foot Olympic-quality Shooting Sports Education Center — the first of its kind in the nation — and began designwork on a much-needed $33 million multipurpose classroom building.

Thanks to our world-class faculty and top-notch staff, Georgia Southern has made strides in the community and the world. This fall’s 10th Annual International Festival drew participants from Statesboro to Sri Lanka, and our Business Innovation Group received a Gold Excellence in Economic Development Award from the International Economic Development Council for its work on local civic revitalization. Our faculty made national headlines with research into sports-related concussions, and several University offerings received high praise for their quality and affordability. These include the graduate programs of the Jiann-Ping Hsu College of Public Health, which were ranked 12th in the nation.

Thanks to the Statesboro-Bulloch County community, Georgia Southern’s 42nd annual A Day for Southern campaign raised a record $2,335,990. It was the third straight year the campaign raised more than $2 million.

Thanks to a roster of top-notch student-athletes and coaches, the Georgia Southern Eagles have been invited to the first bowl game in school history, which you can read more about below.

Thanks to the generosity of our campus community, more than 700 tags were pulled from the annual Holiday Helper tree, which allows participants to buy gifts for those in need, and the Staff Council Warm Clothing Drive distributed new or gently used coats, sweaters and more to the community.

These are just a handful of highlights from the 2015-16 academic year, and we’re thankful not only for the pride and notoriety they bring to our University, but also for the loyal supporters who made them happen.

Thank you so much for your dedication to Georgia Southern, and we wish you a joyous Holiday Season and a very Happy New Year!

For the last 10 years, Campus Recreation & Intramurals — or CRI, as it’s known — has performed internal assessments of its programs each year. This voluntary process might seem excessive for one of the largest departments at the University, but if you ask Michele Martin, program director for University Wellness and coordinator for the yearly assessment, it’s the right thing to do.

CRI is comprised of eight different programs, which manage between 350 and 400 student employees and more than 600,000 visits from campus and its community participants. Martin says the assessment isn’t just good for the required SACSCOC or review processes, but helps improve department services.

Instead of relying on anecdotal evidence or random opinions from participants, CRI formally collects data that can help them determine how to be more effective and efficient. Since implementing its yearly assessment, the department has improved their student employee processes as well as its risk management plan, which is a top priority.

While getting buy-in and acceptance might have been a struggle early on, Martin says new employees especially value the fact that they have a voice in the operation and can affect change for the better. Georgia Southern strives to get better, and CRI is modeling our mission to bolster student success. Assessment can be a powerful tool in reaching that goal. Read more >>

Holiday Season begins with the Lighting of Sweetheart Circle

We kicked off the holiday season with the annual Lighting of Sweetheart Circle on Thursday, Dec. 3. Sponsored by our own University Programming Board, the event included a special appearance by Santa Claus. Georgia Southern’s Homecoming King DiArron Morrison and Queen Kayla Wilkinson hosted this year’s festivities. From free hot chocolate and Christmas music to pictures with Santa and snowball fights, it was a great way to ring in the holidays! Relive the Lighting.

The Eagles are going bowling for the first time in program history. This bowl appearance is the culmination of a rich football tradition at the University, which resurrected its program in 1982, After winning six national titles at the FCS level, the Eagles have soared to a 17-7 record in two seasons at the FBS level.

With an 8-4 record this season, Georgia Southern has been selected to play in the GoDaddy Bowl in Mobile, Alabama, on Wednesday, Dec. 23 at 8 p.m. Eastern/7 p.m. Central. The Eagles will face Mid-American Conference Champion Bowling Green State University, who posted an impressive 10-3 record this season.

Tickets are available through www.gseagles.com/bowl, and it’s important not only that our fans buy tickets, but that they buy those tickets through Georgia Southern, helping to keep us financially sound throughout this entirely new process. The Georgia Southern bowl site also has hotel and visitor information about the City of Mobile and a listing of different events held throughout bowl week.

I look forward to seeing all of Eagle Nation take over Mobile! 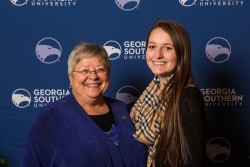 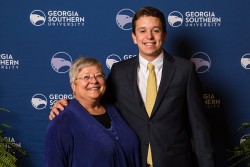 This event brings hundreds of the brightest high school seniors from around the world to our campus, giving them an opportunity to interview for valuable and prestigious academic scholarships. In addition to interviewing for scholarships, students and their parents had a chance to attend many informative sessions about Georgia Southern University, ranging from our engineering program to our opportunities to study abroad.

In order to be invited to the Southern Scholars Showcase, students must have outstanding test scores and GPAs. They are among the very best in their high schools. Last year, the average test score for attendees was 1349 SAT (math and critical reading only) and a 30 composite score on the ACT. This year, 121 students attended the event with an additional 10 students visiting for late interviews. There will also be additional phone interviews offered for international and out-of-state students who could not attend.

The Southern Scholars Showcase is just the first chance for prospective Georgia Southern students to earn merit-based, academic scholarships. On Feb. 26-27, Scholars’ Day will bring an additional 270 students to campus to interview as well. To qualify for an invitation to this event, a student must earn at least 1200 on the SAT (math and critical reading only) or 27 composite score on the ACT, and must also demonstrate high academic ability within the classroom. Read more >> 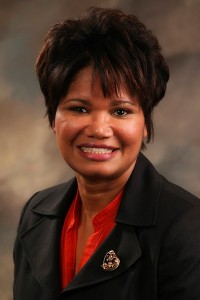 The Division of Continuing Education continues to offer new programs and conferences. Find out more >> 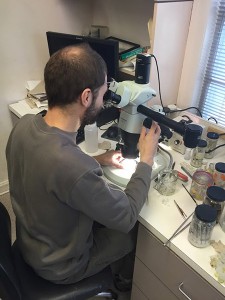 The U.S. National Tick Collection, sponsored by the James H. Oliver, Jr. Institute for Coastal Plain Science in the College of Science and Mathematics, held a grand reopening on Wednesday, Oct. 28.

The assemblage is the largest continuously curated tick collection in the world, preserving more than a million tick specimens and about one-third of the world’s primary tick types. Its taxonomic breadth is enormous, and holds 96 percent of all recognized tick species and 100 percent of all U.S. tick species.

If you missed the grand re-opening, I hope you will take the time to visit the collection. It is quite extraordinary. Read more >> 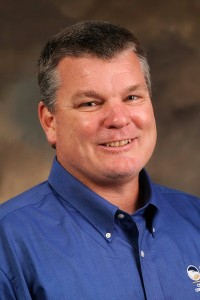 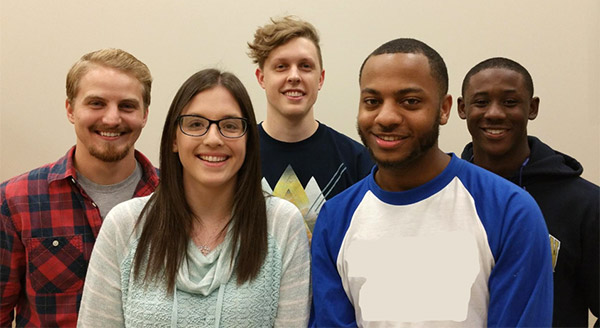 The CDCA Student Mobile App Competition, now in its fifth year, seeks to help students stimulate creative thinking and promote entrepreneurship while offering them development support, marketing expertise, mentorship and guidance. Full-time high school, undergraduate and graduate college students submitted a one-minute video detailing the idea for their app as well as its functions and use for the general public. 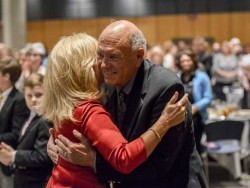 The Statesboro-Bulloch Chamber of Commerce named Doug Lambert (’71) 2015 Business Leader of the Year. Lambert graduated from Georgia Southern College in 1971 with a bachelor’s degree in marketing, and made his mark in Bulloch County in the hotel and hospitality industry. Lambert has always been a strong supporter of Georgia Southern University, and 1997 he was named the College of Business Administration Alumnus of Year. Lambert continues to support the University, and is currently vice chairman of the College Advisory Council, as well as the chairman of the Academic Advisory Council of the Hotel and Restaurant Management program. We are so proud of Doug and all he has accomplished, and we congratulate him on this prestigious honor. 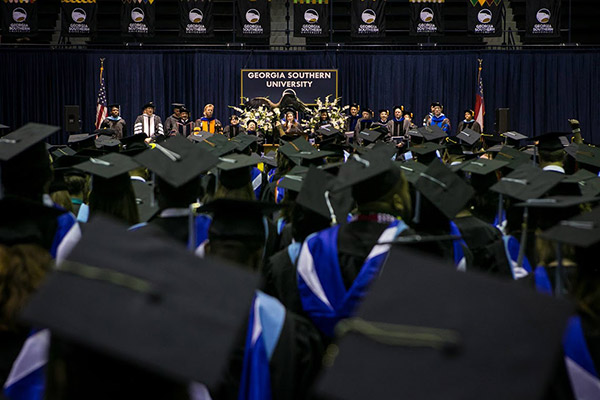 This year’s commencement speakers were Kathy Bradley, an author, speaker and prosecuting attorney who lives and works in Bulloch County; Lonice Barrett, special assistant in the Office of Gov. Nathan Deal, and a 50-year alumnus of Georgia Southern; and Maj. Gen. Leslie C. Smith, Deputy to the Inspector General for the Office of the Secretary of the Army.

The ceremony was also the first time that Georgia Southern recognized “Double Eagle” graduates in the ceremony. The Double Eagle distinction refers to students who have earned two or more degrees from Georgia Southern. Before each ceremony, Interim Provost Diana Cone, Ph.D., asked all new Double Eagle graduates to stand and be recognized and applauded for their new distinction. Each new Double Eagle will receive a special recognition pin for their achievement, and will be invited to special events hosted by Alumni Relations, allowing them to build a professional network with other alumni and Double Eagles.