Spring term has officially sprung, and Georgia Southern is alive with activities.

The University will host several renowned speakers who will address such diverse topics as dealing with depression and how to be an informed voter. Georgia Southern is also currently celebrating Black History Month, when we highlight the rich culture of African-Americans and the important figures that helped forge our country’s history.

There is so much to do on campus, and our students not only get involved in clubs, sports and events, but also to give back by serving in worthwhile causes. The “For the Love of Blue” Student Philanthropy Fair will host several of these causes and organizations, looking for students to keep up the good work.

The Spring 2016 of Georgia Southern magazine is in print and online now at GeorgiaSouthern.edu/magazine. This issue features a pictorial keepsake of the Eagles’ historic win in the GoDaddy Bowl, as well as notable alumni and donors who strengthen the legacy of this great University.

With so much going on, it’s important to stay informed. Visit the Georgia Southern Newsroom to stay up to date on these and other events at GeorgiaSouthern.edu/news.

Graduate students entering the Master of Science in Biology sometimes misperceive their skills and knowledge against the expectations and amount of work in the program. And while this could create problems for many students, Checo Colón-Gaud, Ph.D., associate professor and graduate program director in the biology department, says that through assessment, the department is better able to prepare students for success.

Through the feedback of several participating faculty members which refine assessment metrics, the biology department is able to get a clear idea of the performance of all the students in the program. Incoming graduate students are made aware of the assessment and given specific guidelines that define how their progress will be evaluated.

Colón-Gaud says this collaborative atmosphere in the department allows them to essentially create thorough, individualized training plans for each student to ensure their success in the program and subsequently help the department reach its instructional goals. 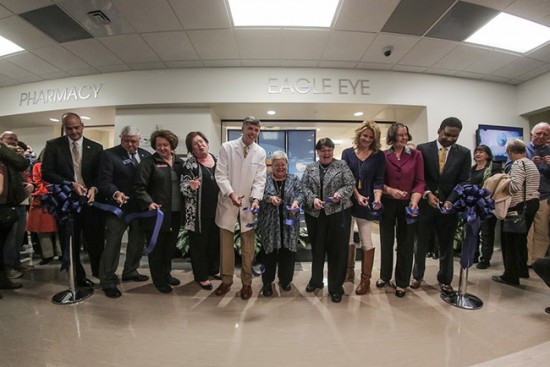 The new 39,000-square-foot building was built to better accommodate the needs of a growing patient population at the University. The facility features an expanded and inviting check-in and waiting area, and boasts a total of 48 exam rooms, 12 of which are dedicated to women’s health — an increase of more than three times the number of exam rooms at its previous location.

The new facility is also home to Eagle Eye Care, and will also feature expanded pharmacy, x-ray, laboratory and immunization areas, in addition to offering new services, including physical therapy, available this spring.

In rankings released for the best online programs among colleges and universities across the country, U.S. News & World Report has again ranked Georgia Southern University’s online programs as among the best for 2016.

In addition, the University’s online graduate education program placed 73rd with four other schools, and the online bachelor’s programs placed 114th with five other schools out of more than 200 schools across the country.

Carroll served 20 years at Armstrong, the last 12 as director, and is a highly respected Human Resources expert in the University System of Georgia (USG). She earned a Bachelor of Business Administration from Augusta University and a Master’s of Education in Adult Education from Armstrong State University. In addition, she is a graduate of the USG Executive Leadership Institute and holds many professional certifications and affiliations. 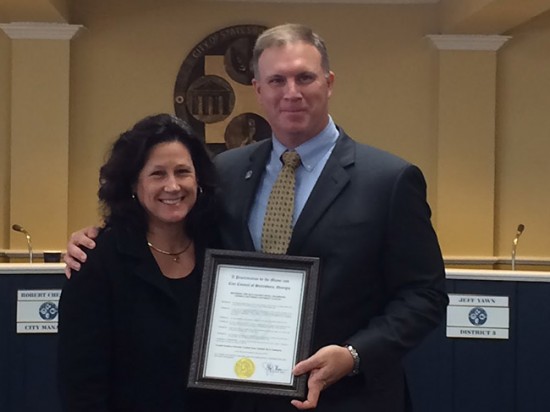 The Statesboro City Council recognized the Georgia Southern Eagles football team for its historic accomplishments at their meeting on Tuesday, Jan. 5, at City Hall.

Statesboro Mayor Jan Moore presented a proclamation to Director of Athletics Tom Kleinlein. The document honored and recognized the Eagles for making one of the most successful transitions into the Football Bowl Subdivision from the Football Championship Subdivision level, and celebrated the Eagles win at the GoDaddy Bowl.

In addition to recognizing the team, the proclamation also recognized the hiring of incoming head coach Tyson Summers, who was officially announced as the tenth head football coach in the history of the program on Saturday, Dec. 26. Read more >> 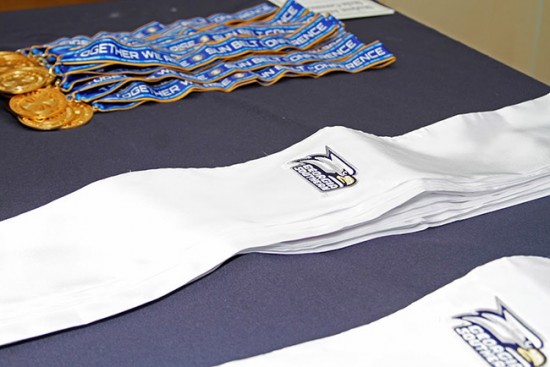 Eagles student-athletes posted a fall GPA of 2.98, the highest fall GPA in the history of Georgia Southern athletics. In addition, the Eagles swimming and diving team boasted a 3.38 GPA, which earned them a College Swimming Coaches Association of America (CSCAA) Scholar All-American Team award for the 16th consecutive year.

The Office of Student-Athlete Services began “The Road to a 3.0” campaign last summer in an effort to boost department-wide GPAs for the academic year. The effort is quickly showing record results.

Two hundred and twenty-two student-athletes made the Honor Roll this past fall. Thirty of those student-athletes posted a 4.0 GPA to earn a spot on the President’s List, and 92 students made the Dean’s List with a GPA of 3.5-3.99.

The faculty at Georgia Southern are constantly innovating and contributing valuable research and resources for students and colleagues around the world. Want to know what they’re doing? Visit the Faculty Highlights section of the University Newsroom, which provides the latest faculty news, organized by college. Visit Faculty Highlights for more >>

This installment of Faculty Spotlight features Axel Grossmann, Ph.D., associate professor in the Department of Finance and Economics. Grossmann says that his students’ success is his greatest asset, and he chose Georgia Southern because it allowed him to balance teaching students with pursuing research.

Peace was also featured in the January 2016 issue of the ICSA Bulletin, the magazine of the International Chinese Statistical Association. Peace was recognized for his work in the field of biostatistics, and for his contribution to the growth of ICSA.

It is worth repeating that Georgia Southern University’s accreditation has been reaffirmed with no recommendations by the Southern Association of Colleges and Schools Commission on Colleges (SACSCOC).

This is such an incredible milestone for the University and it couldn’t have happened without the hard work and expertise of our faculty and staff. Thank you to all who contributed to this effort. It was a long process but well worth the result. 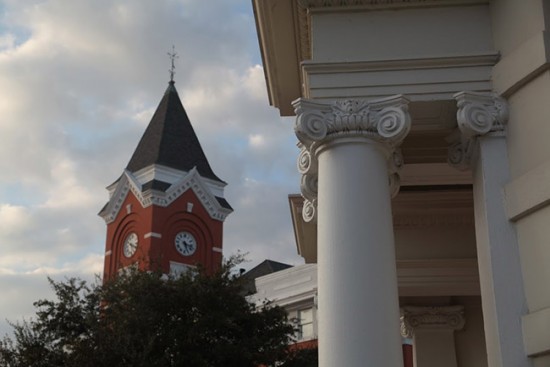 The City of Statesboro has been selected as one of 15 finalists from an initial field of 400 cities in the America’s Best Communities contest, sponsored by Frontier Communications, DISH Network, CoBank and The Weather Channel.

The winner of the contest will receive $3 million to use for the city project outlined in their contest entry. Statesboro’s bid for the prize is based on its concept and plan to revitalize South Main Street from the entrance of Georgia Southern to the courthouse square. The stretch has been dubbed “The Blue Mile,” and the prize would help fund the redesign.

Statesboro’s civic team now heads to the America’s Best Communities Summit in Durham, North Carolina, in April, where they will submit a more detailed proposal and hope to be one named of eight finalists for the $3 million grand prize. The winning community will be announced in April 2017.

Join us again this year for the Feed the Mosasaur culinary event on March 5 at 6:30 p.m. in the Nessmith Lane Conference Center Ballroom. The evening will include a cooking demonstration by Executive Chef Thomas Sweatt of Georgia Southern Catering Services with wines, a commemorative menu and recipes. Dinner will be followed by a Rumba dance lesson and free-style ballroom dancing. RSVP by February 19 or visit the website for more information. 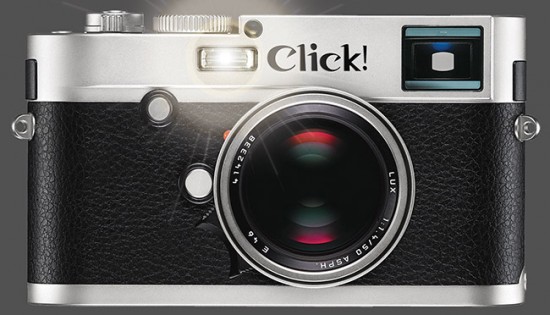 From the first image captured in 1826 through the digital revolution, cameras have become a part of nearly every facet of life. Visitors can explore the art, history and science of photography through a collection of historic cameras and hands-on activities about how they work. 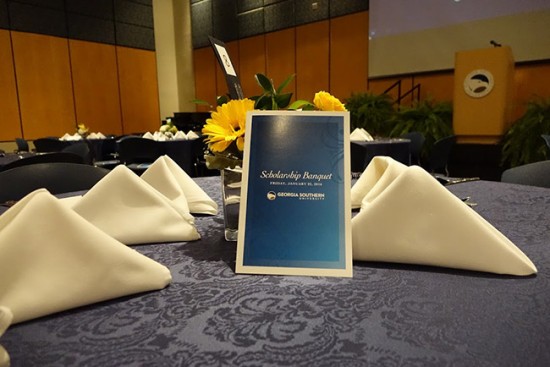 University Advancement and the Office of Donor Relations hosted the annual scholarship banquet on Friday, Jan. 22 at the Nessmith-Lane Conference Center ballroom. The event, which attracted a crowd of 180 participants, provided an opportunity for University donors to meet the recipients of their scholarships. 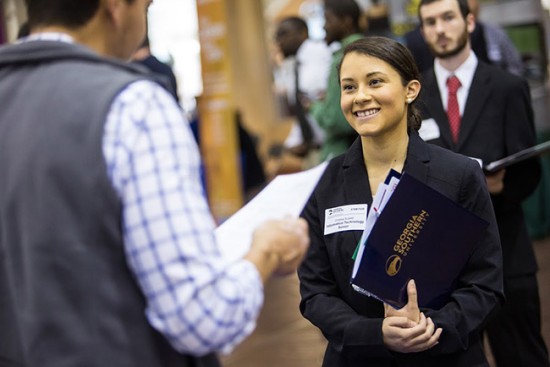 The Office of Career Services will host the annual Eagle Expo Career Fair for students and alumni on Wednesday, Feb. 24, from 12 – 4 p.m. at the Bruce and Kathryn Grube Recreation Activity Center. The event provides attendees with an opportunity to network with recruiters and learn about career opportunities. Eagle Expo is the largest recruiting event at Georgia Southern University.

During the event, more than 90 employers from government, retail, logistics, sales, manufacturing and other industries will recruit students for job, internship and co-op opportunities. A few notable employers participating include Cintas, Verizon, GEICO, Deutsche Bank and Target. 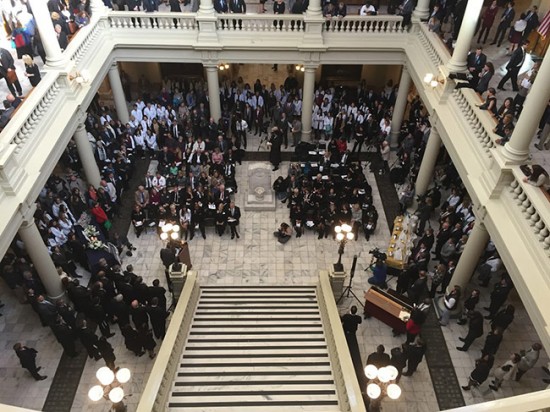 On Monday, Jan. 11, at the Georgia State Capitol, Gov. Nathan Deal, along with state officials, students and family members, held a memorial service for the five Georgia Southern nursing students killed in a tragic accident on April 22 near Savannah.

“To lose five young, promising ladies who had devoted their lives and their future to the profession of nursing is indeed a tragedy,” said Deal.

Moved by the emotion of the tragedy, Deal offered kind words to the family and friends in attendance, and promised the state is “continuing our efforts to try to prevent these tragedies.” 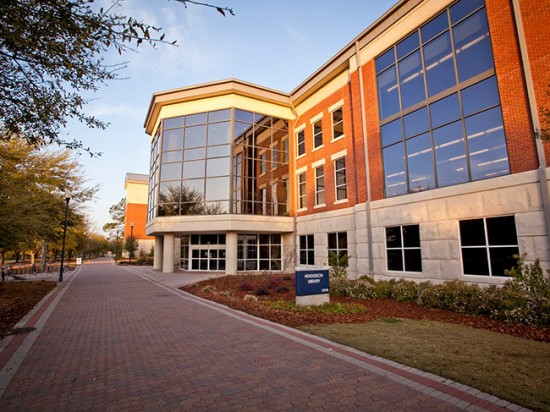 The article, “Increasing participation in your institutional repository,” highlighted the efforts of the University in creating the Digital Commons repository for faculty and staff, as well as the cutting-edge software used to integrate the disparate pieces.

March 5 (RSVP by Feb. 19)
Feed the Mosasaur to support the Georgia Southern Museum