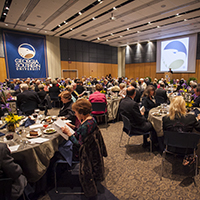 I am pleased to announce that Georgia Southern has established the Marvin S. Pittman Society to recognize the contributions of individuals who are among the University’s most distinguished and loyal supporters. These individuals serve as the foundation for building a stronger future at Georgia Southern. Membership in the society is extended to contributors who have accumulated lifetime giving of $25,000 or more through the Georgia Southern University Foundation, Inc. Couples’ gifts are combined to count as one household.

This past weekend, I was pleased to host members of the Society on campus to not only thank them for their support, but to also give them an opportunity to see all of the wonderful things that are going on at the University. Attendees had the opportunity to take a tour of campus, see the new Biological Sciences Building and even take in an Eagle baseball game. We also unveiled a new Donor Wall in the Bishop Alumni Center to honor Georgia Southern’s loyal supporters.

To view a slide show from this past weekend’s events, CLICK HERE. For more information on the Society, please contact Jill Forehand at jforehand@georgiasouthern.edu.

Former Georgia Southern Physics Department Chair Mark Edwards (’77) is the newest recipient of the Fuller E. Callaway Professorial Chair, which acknowledges his outstanding accomplishment and dedication to classroom education. During his 22 years at Georgia Southern, Edwards not only has taken a leadership role in fostering student learning and success, but also has led the development of an innovative approach to teaching physics called Studio Physics. The unique course integrates separate lecture and laboratory classes into a seamless educational experience, which is designed around active, inquiry-based learning. Because of this integrated approach, Edwards and his colleagues have seen a significant increase in student success in this difficult subject area. Read more…

2013 Football Season Ticket Renewals began on March 5th and will run through May 15th. Season ticket holders can renew their seats by calling 1-800-GSU-WINS or by going online atgseagles.com. New season ticket orders will be taken now and will be filled after the renewal deadline of May 15th. For more information on ticket prices and seat availability, please contact the Georgia Southern Athletics Ticket Office at the above number. As a reminder, the annual Blue-White Game will be held on Saturday, April 13th at Allen E. Paulson Stadium at 1 p.m. We have several special events planned and I look forward to seeing everyone there.

Leigh Thomson, a Graphic Design Professor at Georgia Southern and Principal at LETR & Co., has been named a 2013 GenerationNEXT: Rising Star of Business in Savannah.

Leigh co-founded LETR & Co., a boutique creative strategies company providing marketing and branding services in 2011. Equally as important in Leigh’s life is her involvement in the Savannah Community. She has dedicated hundreds of hours during the past two years to various community organizations.

Winners are selected based on a combination of their business success and philanthropic contributions.Read more…

On Saturday, March 16, Georgia Southern will once again be participating in the Savannah (Ga.) St. Patrick’s Day Parade. With more than one million visitors expected to watch the parade this year, this is a great way to promote Georgia Southern. When I became President, I restarted the tradition of Georgia Southern riding in the parade. Since then, my wife and I have enjoyed the parade each year and we certainly appreciate all of our alumni and students cheering us on. This year, our float will feature our mascots, Gus and Freedom. Additionally, Head Football Coach Jeff Monken and Miss Georgia Southern, Reedi Hawkins will ride along.

Georgia Southern’s ROTC Eagle Battalion was honored at the State Capitol by Georgia Governor Nathan Deal and Statesboro area lawmakers this past Tuesday.

The cadets were recognized for winning the 2013 Ranger Challenge which tests physical endurance and mental agility. The two-day competition in January included marksmanship, land navigation and a 13-mile course that tested their technical and tactical skills. Georgia Lt. Gov. Casey Cagle, who attended Georgia Southern, said it was an honor to recognize the ROTC cadets for winning the Ranger Challenge. The Eagle Battalion received resolutions from lawmakers in the state House and Senate.

The Eagle Battalion will compete in the International Sandhurst Competition at the U.S. Military Academy next month. 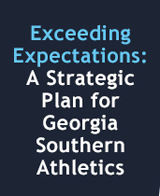 With the ever-changing world of NCAA Division I Athletics, Georgia Southern’s Athletics Department engaged in a strategic planning process to outline its future. Faculty, athletic department staff, coaches, student-athletes and key community members provided input and feedback during the creation of the new strategic plan.

Under the leadership of our new Athletic Director, Tom Kleinlein, the plan was developed to serve as a working document to be used by the Department as they work to achieve national distinction in academics and athletics.

This summer, Georgia Southern is offering more than 1,600 classes with more than 300 of them being offered fully online. Summer is a great time for students and even alumni to take classes.

In addition to current students, alumni and even students from other universities are choosing to attend Georgia Southern because of the variety of classes and the shorter semester.

Whether you are interested in pursuing your MBA, brushing up on some skills or earning a new degree, summer is a great time to get started.

For information on available courses, cost and deadlines, visit:www.georgiasouthern.edu/summer.

These are just a few select events that are taking place this month, so please check the below calendars for more information.