The start of the fall semester, like most, began with hope and optimism as the University welcomed more than 20,700 students to campus, with the traditional Day One celebration for incoming students and the beginning of what promised to be an exciting football season. But two recent tragedies have since given us all pause, and a solemn reminder of just how fragile and precious life truly is.

Today, our hearts remain heavy with the thoughts of Michael Gatto, an 18-year-old freshman who was killed off-campus on August 27, and Brooke Edwards, a sophomore who passed away on September 12 in her off-campus apartment. Nothing can mask the hurt that our students, faculty, staff and our entire community feel at the loss of these two young students – lives so full of energy, enthusiasm and promise. Our thoughts and prayers are with both families and their many friends during this difficult time. In true Eagle spirit, we came together to hold separate candlelight ceremonies in their honor. The outpouring of support from students was overwhelming and I am so grateful for the love that was shown to those still suffering from this terrible loss.

In memory of these students, our University will remain supportive and strong. We remain hopeful for a year filled with positive events, inspiring stories and continued success – hopeful for healing and building anew. We are all part of the Georgia Southern family. As we begin the healing process, we must also stay the course through these tragedies. We remain one of the safest universities in the south and continue to build a bright and successful Eagle Nation – one built on tradition, strength and sympathy.

A Day for Southern Breaks Records

The 41st annual A Day for Southern fundraising campaign raised $2,221,424, breaking last year’s record of $2.1 million. This marks the second straight year the campaign has raised more than $2 million. What a testament to the ongoing commitment from Bulloch County and the City of Statesboro to Georgia Southern and our students! The gifts received support University programs not funded through state dollars and go to help students achieve academic excellence. In addition, the annual fundraiser helps fund outreach centers such as the Center for Wildlife Education, the Georgia Southern Museum, the Garden of the Coastal Plain, and state-of-the-art facilities and programs that attract and support research and scholarship.

A special “thank you” goes out to all of the volunteers, community members, and especially to Barbara Christmas Golden, the Chair of this year’s event and Chair of the University Foundation. We could not have done this without her help.

Update on the Partnership with Coca-Cola

As you undoubtedly have heard by now, the University signed an historic partnership with The Coca-Cola Company, making them the exclusive beverage provider for Georgia Southern University. In addition to added revenue and scholarships for students, the contract provides the University with additional marketing opportunities alongside the Coca-Cola brand. We are already seeing the benefits of this partnership with special advertisements and promotions taking place across the state. Head Football Coach Fritz is featured on a Coke billboard in Atlanta, while in-store promotions with mascot GUS are on display, and a sweepstakes allows Eagle fans a chance to win tickets to a Georgia Southern football game.

The athletics teams have been provided Powerade, and other beverages, to keep them hydrated throughout their seasons as part of the contract with Coca-Cola. 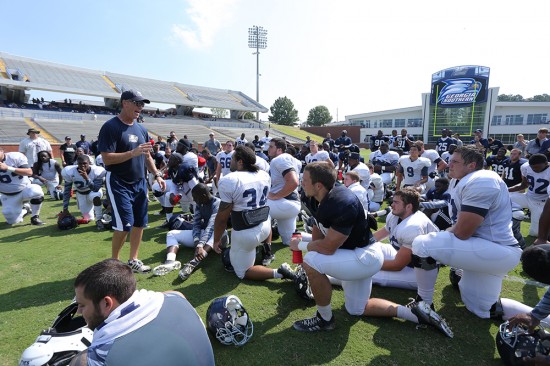 The new video board atop the Football Operations Center proudly displays the Coca- Cola logo, clearly visible to everyone who attends Georgia Southern home games. 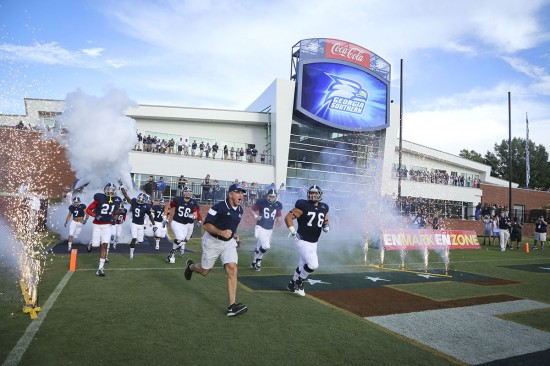 Former Eagle offensive lineman Tim Durden leads the team out of the tunnel and onto the field for the Eagles’ first-ever FBS game at Paulson Stadium.

Our academic and research programs continue to excel and be recognized for their renowned achievements. We are proud of everyone who is making Georgia Southern a premier institution of higher learning throughout the state and beyond.

International Studies a Finalist for Award

The Atlanta World Showcase & Governor’s International Awards, sponsored by theAtlanta Business Chronicle and the World Trade Center Atlanta, highlight the companies and individuals working to build and strengthen metro Atlanta’s vibrant international business community. The winners will be honored during a special awards ceremony on Oct. 2, 2014, and featured in that week’s issue of Atlanta Business Chronicle.

Congratulations to the Center for International Studies!

Congratulations to everyone involved for the prestigious nomination!

Collaboration with the City Brings New Museum and Opportunities for Students

Georgia Southern University and the Statesboro Convention and Visitors Bureau (SCVB) have teamed up to create Museum on Main – an exhibit highlighting the unique history of Statesboro. This collaboration between the SCVB, Georgia Southern Museum, and the College of Liberal Arts and Social Sciences’ Public History program allows students seeking a Master of Social Sciences and Master of Arts in history degree to earn an additional certificate of public history, while completing their coursework. Students in Brent Tharp’s “Introduction to Museum Studies” seminar class developed the concept and chose what items should be displayed in the exhibit. Each year, Tharp’s new students will have the opportunity to update the space with unique material for visitors and locals alike to enjoy. 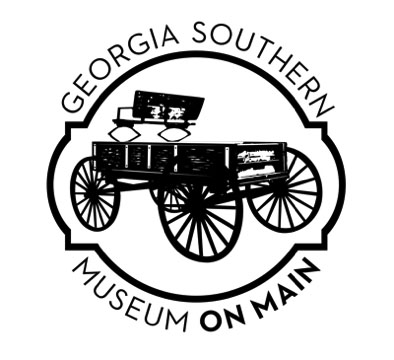